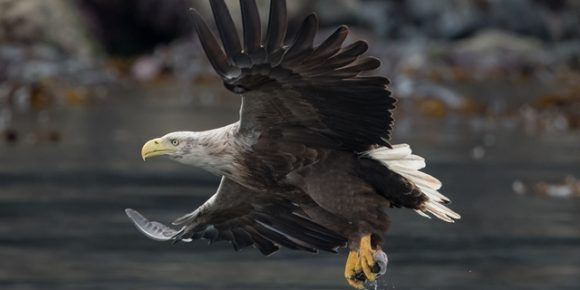 Everything feels a bit crazy and uncertain right now as we find ourselves in a very novel, worrying situation so we have decided to up our game a little bit when it comes to writing blogs. We have already acknowledged that we don’t write blogs as much as we would like to and what better time to start than now! I’m currently sat in my dining room on my laptop looking out the window and hoping that at least a few people who are also sitting at home will find some sense of comfort or amusement or just a way to pass a few minutes of the day whilst reading our blogs.

I thought today I would do just a short blog about the White-tailed Eagles (Haliaeetus albicilla) that have recently been released on the Isle of Wight as it is an uplifting conservation story that many people might have already heard of. White-tailed Eagles are the biggest bird of prey here in the UK and are on the RSPB Red List. The original population went extinct in the UK in the early 20thcentury; the birds we have here now are descended from reintroduced birds, highlighting how important this new reintroduction could be. Illegal killing is thought to be the biggest reason these miraculous birds became extinct and large birds of prey do still face illegal persecution in the UK but the RSPB suggest that there are 106 breeding pairs of White-tailed Eagles in the country, almost exclusively in North-West Scotland.

To try and increase this small population of eagles in the UK (and crucially to try to pave the way towards these birds taking back their original haunts) The Roy Dennis Wildlife Foundation has been working with Forestry England to begin an English reintroduction programme in the Isle of Wight. The partnership was granted licenses from Natural England and Scottish Natural Heritage to begin to re-establish a population of White-tailed Eagles on the South Coast. The Isle of Wight was the chosen location because it was the last known breeding site of the species in southern England before they went extinct and there is still lots of suitable habitat along the South Coast for these massive, regal birds of prey. Six young birds from Scotland have been fitted with coloured leg rings and small transmitters and released on the island as part of a five-year programme.

One of these young birds made the news in early January when he decided to settle down in Oxfordshire! The young male was seen scavenging with the local Red Kites for a few days and this is fairly common for young eagles as they can wander large distances for a couple of years before they then settle down. More recently, a White-tailed Eagle has been spotted flying over the Hawk Conservancy Trust in Andover (not one of the reintroduced ones from the Isle of Wight as he was not ringed)! I highly recommend following this brilliant falconry centre on social media, they are full of excellent posts and brilliant information but my favourite so far is the video they posted on Instagram a few days ago of this eagle flying over the centre completely dwarfing the Red Kites trying to mob it! These eagles have a 2-2.5m wingspan and you can really see the size difference in this video. That combined with the excitement of the staff is just brilliant!

So during this lockdown it might be worth keeping your eyes on the skies (from your gardens or homes) because these fantastic animals might not be too far away!

With Thanks to the Roy Foundation for permission to use the picture by Mike Crutch.