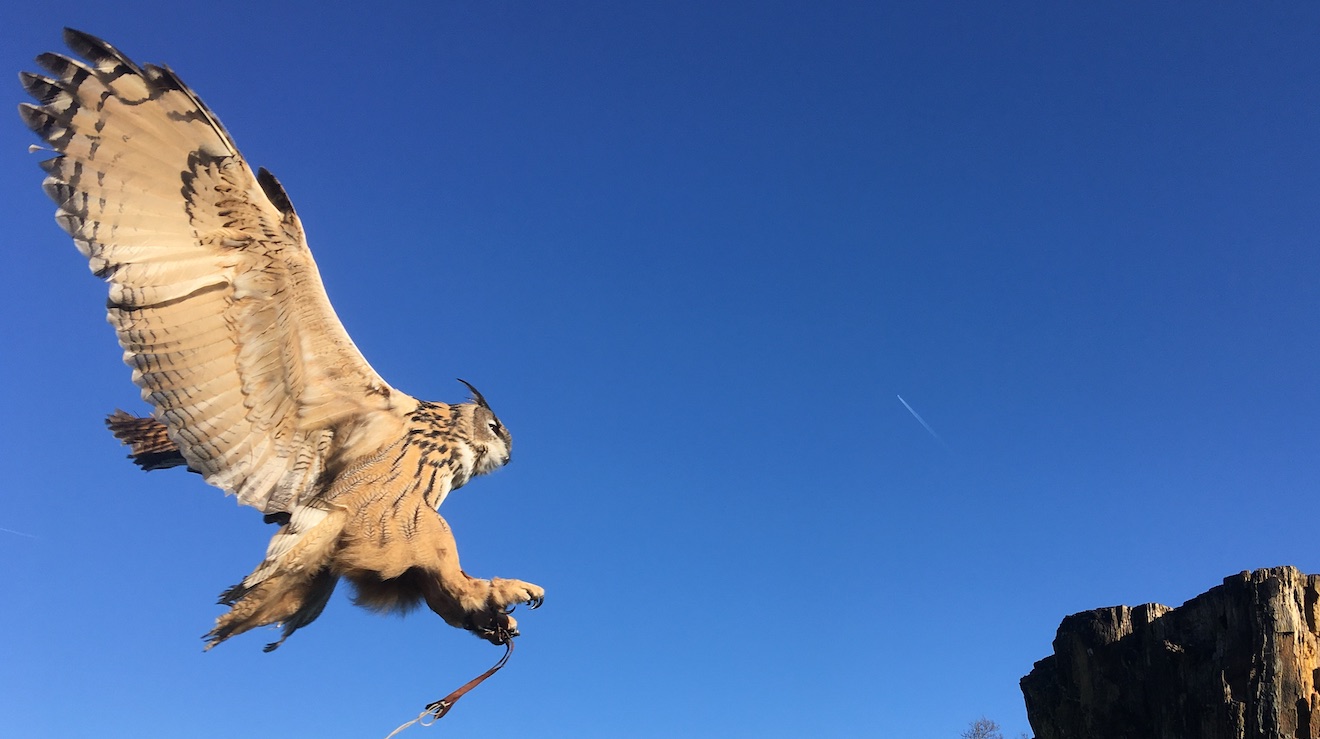 In July 2019 Feathers and Fur were lucky enough to be asked to take on a gorgeous male European Eagle Owl named Norman. He had spent a few years living in Wales with our good friend, supporter and falconer who was lovely enough to rescue him from a horrific start in life. Unfortunately, due to Norman’s size he needed to move on from here and that’s where we came in.

Norman was bought by a man who watched Harry Potter and so thought it was a brilliant idea to take on the responsibility of owning an owl. We will never understand how people watch this movie, which is about wizards and magic, and yet somehow still believe everything they portray about owls to be true. Nonetheless, this is what this man did and he is not alone. Many owls and birds of prey suffer in this country due to there being no proper licensing for the breeding or selling of these animals. It is something that we, here at Feathers and Fur, are very passionate about as we have seen first hand what can happen to these beautiful creatures when not taken care of properly. Unfortunately, Norman is one such example. Norman was purchased as a cute little ball of fluff and placed into a small wire budgie cage…. Birds grow very quickly and Norman was never allowed out of that budgie cage. This meant that within a few months Norman had become a fully grown Eagle Owl who no longer fit in such a tiny cage. The problem was so bad that this poor, innocent boy had to have the cage surgically removed from his body as he had grown around the bars. Ignorance is no excuse for such blatant cruelty but we are pleased to say that Norman’s story does not end there. 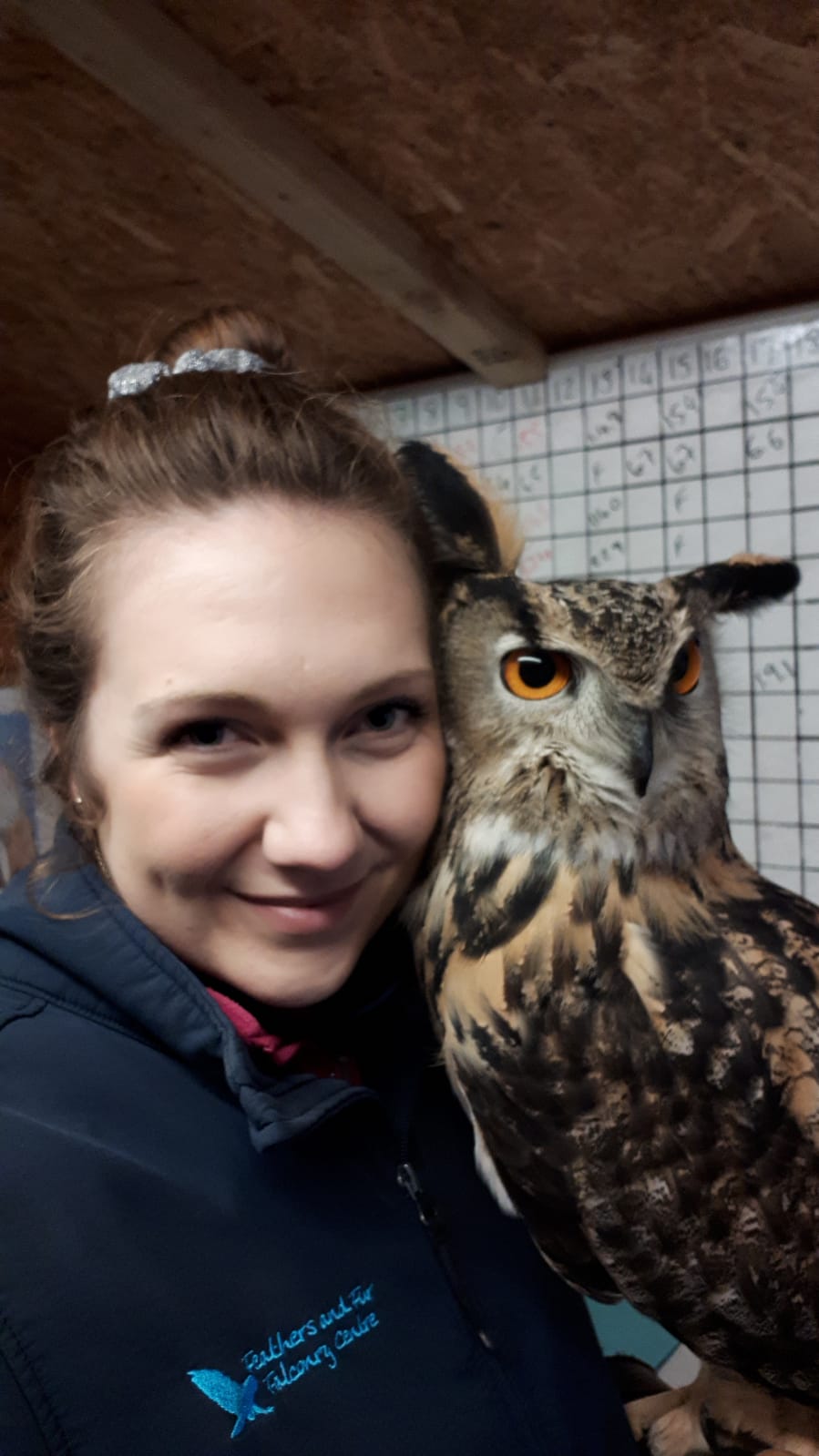 Here at the centre Norman has been given another chance at life; a chance to fly, to stretch his wings and to interact with people on a daily basis. We knew a 6 year old owl, who has never been trained, socialised or exposed to anything but a small metal cage and then the beautiful rolling hills of Wales, was going to be a challenge. After all, we were asking him to live in a centre where people would be coming to see him every day. The first step was to make sure he was comfortable and to give him space and time to settle in to his new aviary. For a few weeks, Norman never ventured out of his quiet corner, a open box designed to allow him to hide if he wanted too, but over time we would see him sat out on his perches. He got used to the falconers and began to take food from their hand. This then prompted us to see if we could start encouraging Norman to fly to the glove for his food within the safety of his aviary. We were pleasantly surprised at how willing and trusting this boy was as he started hopping onto the glove. We then made him some nice new falconry equipment and started to bring him out of the aviary, sometimes for a short walk to get him used to things like cars, bikes and horses, or sometimes just to sit out on the glove in the centre whilst visitors walked around (a process known as manning).

His progress was incredible and his confidence was growing so much but we knew that if we wanted Norman to be part of the flying team, he would have to be happy and confident in our flying field. We began by walking him up to the field and sitting with him so he could get used to all the movements and sounds that he would be exposed to if he was out here flying. Every day at feeding time, we would take Norman up to the field, pop him on one of the perches and feed him. This builds up a positive association; Norman was learning that the field is a safe space and the food reward made it a pleasant place for him to be. The next step involved the patience of a saint! We now wanted to get Norman to fly to the glove out in the flying field. For what seemed like forever, we would take Norman up there every day, stand about a foot away from him whilst making ourselves look like complete idiots, waving food around, calling his name, making odd noises, anything to get his attention. But the pure joy we felt the first time Norman flew made everything worthwhile. Since that initial flight, Norman’s progress has been unbelievable. He now flies the entire length of the field (still on his training line) and is even flying for customers! In just a few months Norman has gone from a nervous, wary boy to one that will now fly to a complete stranger for both our hands on sessions and photography experiences and we could not be more proud of him.

Norman is a resilient, brave, gentle boy and it is an honour for us to be a part of his recovery and a privilege to be able to give him his forever home. Come down to the centre to pay Norman a visit. He is a very chatty owl so if you hoot at him he will hoot back! Or you could come and try one of our hands on experience sessions where you could have the opportunity to fly Norman (that feels amazing to be able to say)!!    Massive thank you to Mr Mervyn Randall for the beautiful pictures of Norman. 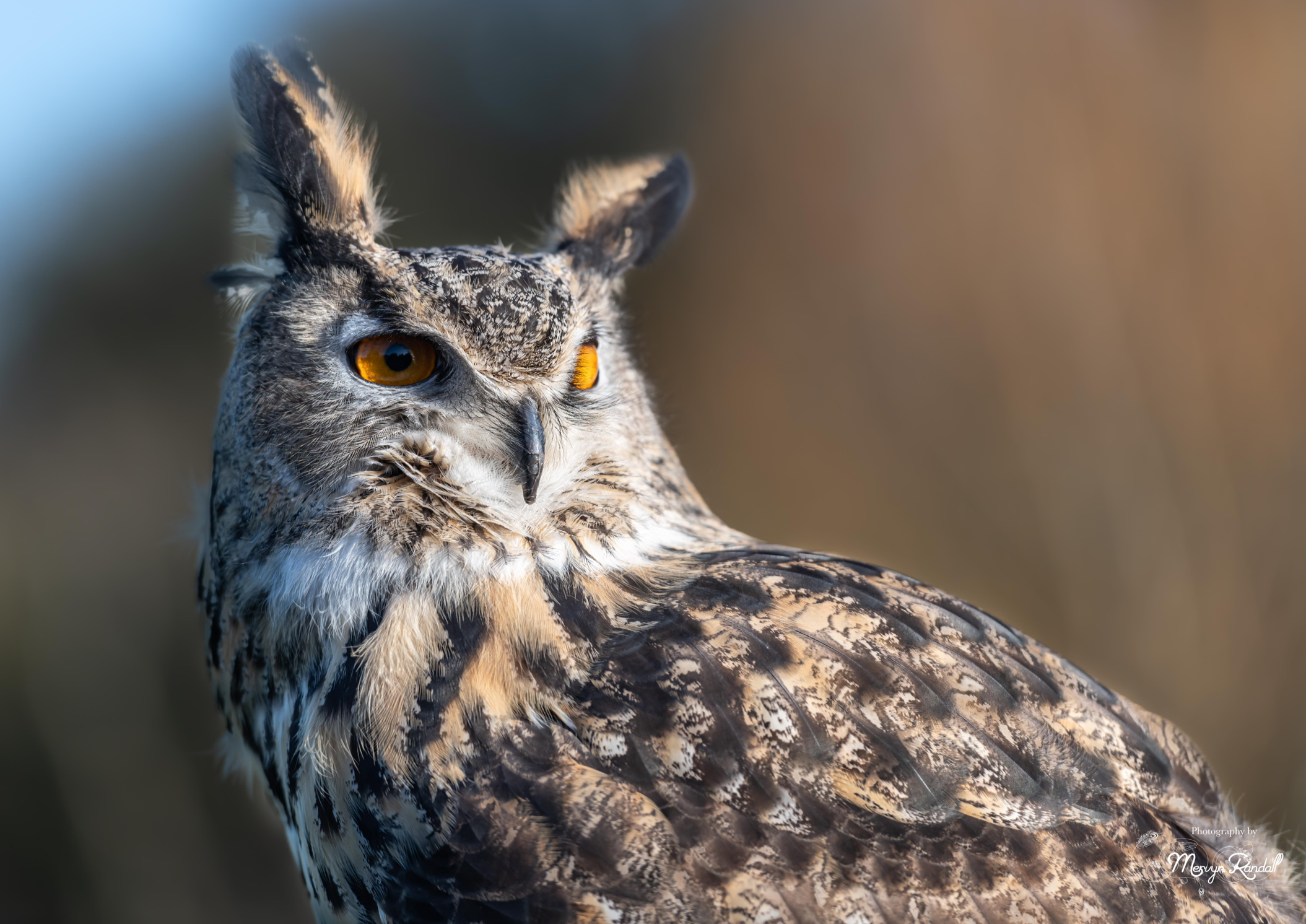