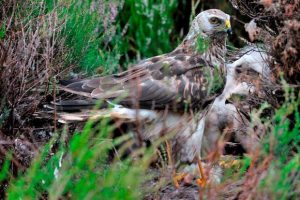 What is a Hen Harrier?

Hen harriers (Circus cyaneus) are the most intensely persecuted bird of prey in the UK and are native to this country. They are an RSPB Red Listed species, meaning they are one of the highest conservation priority species in the UK and are deemed to need urgent action. Hen harriers are ambush hunters designed for agility rather than speed and their Latin name Circus comes from the Ancient Greek kirkos meaning ‘circle’ referring to their circling flight. The species name cyaneus is Latin for ‘dark-blue’ referring to the gorgeous colour of the male Hen harrier. They are sexually dimorphic (male and females of the species look different) so while the male is grey-blue, the female is brown with a white rump and a long, barred tail earning her the nickname ‘ringtail’.

Hen harriers are a ground nesting species and usually the female sits on the nest to incubate the eggs while the male hunts and returns to the nest with food. He passes food to the female in mid-air (using their powers of agility) so as not to give away the nest location to potential predators. They prefer to live in open areas with short vegetation; in the breeding season this is usually the upland heather moorlands of Wales, Northern England, Northern Ireland and Scotland (and the Isle of Man). In winter they move further south to lowland farmland, heathland, marshes and fens. Individuals in Eastern and South-East England are most likely to be visitors from mainland Europe.

All native wild birds in Great Britain are protected from persecution. In Northern Ireland they are protected by the Wildlife (Northern Ireland) Order 1985 and in England, Scotland and Wales by the Wildlife and Countryside Act 1981. This means it is illegal to kill, injure or ‘take’ any wild bird and to take or damage the nest of any wild bird whilst in use or being built. The eggs of all wild birds are also protected. Hen harriers are listed as a Schedule 1 bird under the Wildlife and Countryside Act 1981 which means that they are further protected by Special Penalties all year round and due to recent amendments to the legislation, crimes against wildlife are now punishable by imprisonment.

If you want to come along and meet some of the UK’s fabulous native birds of prey up close, check out our experience sessions.

Raptor persecution used to be more common than it, thankfully, is now; some of the main practices that have now fallen out of favour somewhat include poisoning, vicious traps, nest destruction and egg collecting. Nowadays, this persecution is frowned on by many and seems to have mostly retreated to upland grouse moors. Driven grouse shooting is a large, historical part of rural life in Britain and although 95% of a Hen Harrier’s diet is made up of small mammals they do also prey on small ground nesting birds such as red grouse chicks causing conflict with the owners of grouse moors.

In 1800, Hen harriers were common and widespread across the UK but when grouse shooting reached its peak in the late 19th century records show Hen harriers were routinely shot. Upland estates employed large groups of gamekeepers to dispatch any bird of prey thought to pose a threat to grouse numbers (and therefore take money away from the estates). Hen harriers were at the top of the list and by 1900 they were almost extinct across mainland Britain. With thousands of gamekeepers drafted for the First World War, Britain’s raptors were allowed a bit of respite and their numbers generally started to slowly increase. At the end of the 1900’s after both world wars, gamekeepers wanted to return to rural life but were met with a mass of people who had found compassion for raptors; this was the start of the conflict we know today.

Driven grouse shooting is still a big part of the economy and culture of the UK, especially in Eastern Scotland and Northern England (around 1,600 grouse shooting providers see 47,000 guests each year) but it is beginning to fall out of favour causing many estates to struggle with the decrease in revenue they have come to depend on. For many estates the pressure is on to produce a good harvest and unfortunately, many groups or individuals will go to extremes lengths to ensure as many grouse as possible survive to be shot by paying visitors. In an area like moorland where there is nothing for miles, for many, the risk of being sent to prison is minimal compared with the thought of their grouse moor collapsing.

Of individuals convicted of offences related to raptor persecution since 1980, over 80% were involved with shooting and the majority of these were gamekeepers. Some keepers use spotlights at night to shoot female Hen harriers and poison and traps are still sometimes used. In fact, is estimated that 11-15% of the Scottish mainland harrier population is destroyed each year! Perhaps even more shockingly studies propose that 72% of young satellite-tagged Hen harriers will disappear in suspicious circumstances on grouse moors in Northern England each year. Scientific evidence suggests that the illegal persecution of Hen harriers, associated with the management of moorlands for intensively rearing large numbers of grouse, is the main factor limiting their recovery in the UK.

To go into all of the conflicting research into the effects of Hen harriers on grouse numbers and the effect of raptor persecution on Hen harriers would be an entire blog all of its own! There needs to be more research done and the studies that have been carried out are nearly always interpreted in many different ways depending on which party wants to use it to support their case! It does suggest however, that rates of raptor persecution don’t seem to be slowing down.

Habitat studies suggest that the UK has the habitat availability to support around 2,650 pairs of Hen harriers, so we currently only have about 20% of the number of pairs we could support. Shockingly, in 2017 there were only three successful harrier nests in the whole of England, occupying less than 1% of the potential appropriate habitat. A species with such a low population size means that any natural pressure such as bad weather or low prey availability, or human pressures like habitat loss or illegal persecution are amplified and could have a devastating effect on the population edging it closer to extinction.

There are collaborative initiatives such as the Raptor Watch and Operation Artemis, established in 2004, which specifically address hen harrier crime and are supported by a range of countryside groups. The RSPB began the Hen Harrier Life project in 2014 which combines on-the-ground protection with the monitoring of birds and nests, investigations to pinpoint the scale of illegal persecution, policy and advocacy work to educate the public and ensure those guilty of persecution are held accountable, satellite tagging to monitor bird’s movements and identify areas where they are most vulnerable and are in most need of protection measures. They achieve all of this by working alongside other conservation organisations as well as politicians, the authorities, landowners and raptor workers. The RSPB Investigation Team also release their Birdcrime report annually and the 2018 figures confirm 87 incidents of bird of prey persecution and only one conviction, relating to an offence from 2017. These figures only just scratch the surface because a large proportion of offences go unreported or unnoticed every year.

Currently, the largest and most reliable annual data collection on Hen harriers is carried out by the Scottish Raptor Monitoring Scheme (SRMS). There have also been five national surveys on Hen harriers carried out, the latest one being conducted in 2016. Surveys such as this are trying to determine the population trend for Hen harriers throughout the year but also from one year to the next; there are increases and decreases being recorded which we can’t currently explain. More needs to be done to truly understand what is happening to our harriers and why.

A proportion of estates refuse to talk about conserving raptors or making any change to their traditional grouse shooting methods (sometimes it is even a matter of principle with much of the game keeping community disliking conservation charities) but, the majority are open to discussing things such as non-lethal control as long as this is done sensitively without accusations. Research suggests that providing alternative food for hen harriers during the breeding season can reduce grouse predation by up to 86%! There are financial incentives in some areas (up to £900 per nest per year) to encourage estates to adopt this technique. Despite all this, progress has been shockingly slow.

The issue of raptor persecution on grouse moors dramatically divides opinion and there are many points to be made on each side of the argument but the statistics undoubtedly show more needs to be done to protect our most threatened species, the Hen harrier. The ultimate argument seems to be to what extent should predators be ‘allowed’ to impinge on human interests and how responsible are we for looking after our natural environment?

With thanks to Scottish Natural Heritage for the use of their picture of Hen harriers on the nest.

If you suspect illegal persecution please report it to the UK National Wildlife Crime Unit: https://www.nwcu.police.uk/how-do-we-prioritise/priorities/raptor-persecution/

Find information on how to get involved with helping Hen Harriers and other birds of prey here: https://henharrierday.uk/

If you own a farm in Ireland or know someone who does and want to help check out the Hen Harrier Project: http://www.henharrierproject.ie/

For an interesting read on how to work with gamekeepers to protect Hen Harriers click here: https://basc.org.uk/hen-harrier-hysterics/

For general information on harriers, illegal raptor persecution and current figure check out the links below: